It was the low that follows the high of writing well. And amateurs don’t trim for altitude, they fly by attitude, and another drink.

Well, the play is the thing and the shooting was bad. But I pencil whipped it to righteous.

The cop was eleven months from having his years. He took one in the shoulder in 96. Has no quick draw rep, not a red flag on his record. He lost his son in the sand in 09.

By my count, factoring the pluses and minuses, the kid’s number was just up. His name on the bullet. That shit simple.

And somehow, my by now, signature summations… still continue to “shine on” that Civilian Police Review Board.

Bourbon five appears like magic, with a yell from the end of the bar.

“Hey Scribe, you’re one helluva cop…here’s to our sins.”

“Thanks Captain, and to that special rung.” 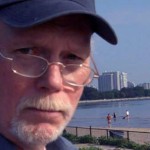